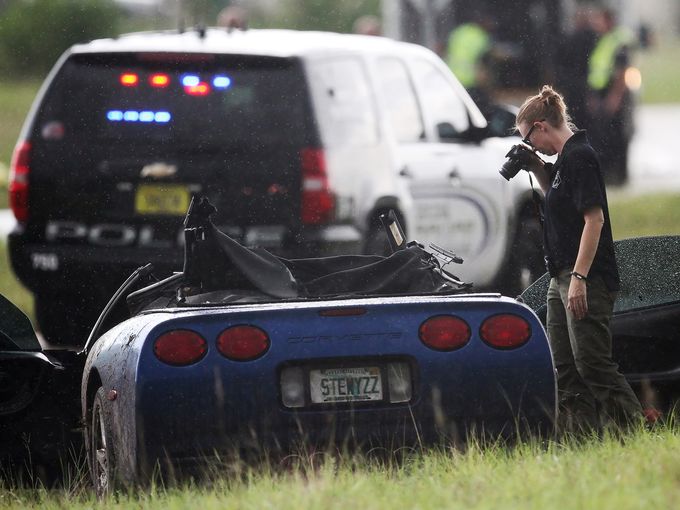 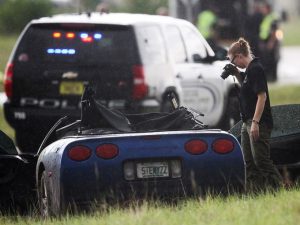 Bicyclist killed in Cape Coral. Click on the image to read the story, view photos and watch a video on news-press.com.

A bicyclist was killed in Cape Coral on Sunday after being hit by a car on Diplomat Parkway just west of Andalusia Boulevard.

The bicyclist and a blue Corvette were traveling east on Diplomat Parkway at about 3:30 p.m. when the car hit the bicyclist from behind. According to news-press.com, the preliminary report indicates drugs and alcohol were not factors in the crash. The bicyclist was wearing a helmet. Read more.

The cause of the crash is not yet known. Unfortunately, bicycle fatalities happen far too often in Southwest Florida. It wasn’t long ago that we wrote about a teenager killed on Kismet Parkway in Cape Coral.

Residents of Cape Coral have expressed concern at council meetings about the safety of bicyclists and pedestrians because of a lack of sidewalks and bike paths.

1.  In all states, cyclists are deemed by law to be drivers of vehicles and are entitled to the same rights on the road as motorists. Expect cyclists on the road.

2. Patience, especially on the road, is a virtue, and can save lives.

3. Do not pass a cyclist until you can see that you can safely do so.

4. Watch out for cyclists when you are turning right. A bicyclist may well be to the right of you and planning to go straight at the same intersection.

5. Also look for cyclists when making a left-hand turn. Cyclists who are crossing straight through the same intersection in the opposite direction may be going faster than you realize.

6. Bicycles, and the people who drive them, come in all shapes and sizes. When backing out of your driveway always look to see if someone is riding in your path.

7. After parallel parking, make sure the coast is clear for opening the car door to exit. 8. Respect cyclists and their rightful spot on the road.

9. Do not to honk unnecessarily at cyclists.

10. If you can’t beat them, join them. Ride a bike. It may just change your life. At the very least, it will give you a better appreciation for the problems cyclists face everyday on the road with respect to motorists.

At Bernardo Injury Law, we have dealt with many cases involving bicyclists. If we can help you, contact us at (239) 332-3000 or toll free at 888-428-8943, email us at gethelp@injuryinfo.org. You can learn more about pedestrian injuries on our website at injuryinfo.org and see some of our case results.