Hit-and-run driver caught after getting in another crash

A hit-and-run driver was caught after she was involved in another crash while trying to flee from the first crash scene.

According to the Florida Highway Patrol, Lacy James, 26, of Fort Myers, struck a car around 6 p.m. in east Fort Myers and then drove off. The driver of the other vehicle followed her. She was speeding and went off the road as she tried to go around a curve on Neal Road. She was thrown from the vehicle and suffered serious injuries, reported news-press.com. The FHP says alcohol was a factor in the crash. Read more.

There have been a recent rash of hit-and-run crashes in Southwest Florida. Last week, we told you about a hit-and-run in Lehigh Acres that happened while a driver was stopped for emergency vehicles working a another crash. In November, we did a blog post about a mother killed by a hit-and-run driver in a parking lot in Immokalee. 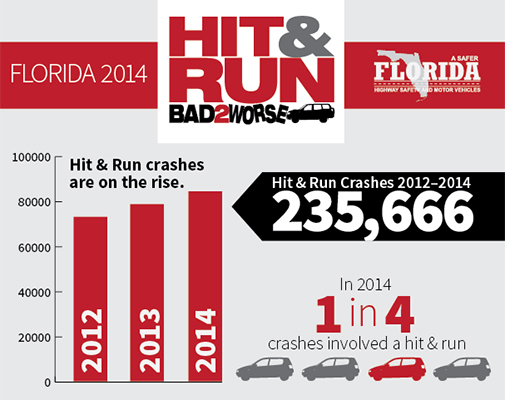 Across the state, there has been an increase in fatal hit-and-run crashes during the last two years. The Florida Highway Patrol is partnering with the Florida Sheriffs Association, the Florida Police Chiefs Association, Students Against Destructive Decisions and the Florida Department of Transportation to combat the problem. The campaign aims to reduce the number of hit-and-run crashes in Florida by educating drivers on their responsibilities if involved in a crash and the consequences they face if they leave a crash scene.

According to the Florida Department of Highway Safety and Motor Vehicles: