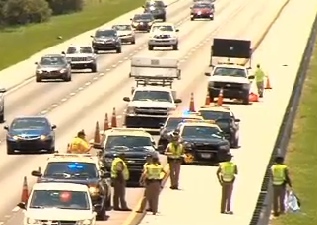 Florida High Patrol officers are investigating a hit-and-run crash that occurred this week in Lee County.

About 11 on Sunday morning, an unidentified pedestrian was walking in the roadway on I-75 when he was struck by a vehicle and killed. Read more.

According to NBC-2, the crash occurred just north of mile marker 146. A vehicle stuck a 64-year-old man from Fort Myers walking northbound. The impact knocked him into the median, and the driver then fled the scene.

Police are asking anyone with information to contact Cpl. Jason Moore at the Florida Highway Patrol at 239-344-1730.

Lee County traffic fatalities are on the rise. According to news-press.com, entering Memorial Day weekend, the unofficial start of the summer driving season, 41 people had been killed in Lee traffic crashes, a 32 percent increase over the same time in 2014. At least 47 people have died on Lee County roads in 2015. More cars are on the roads due to increased population and a record tourist season, which creates a possibility for more crashes. However, many of these fatalities can be avoided according to Jay Anderson, executive director of Stay Alive… Just Drive in Fort Myers.  Here are some of Anderson’s traffic safety tips: